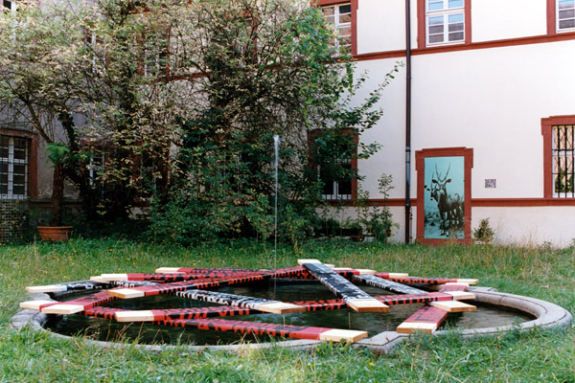 Installation in the courtyard of the Adelhauser convent, Freiburg/Breisgau
B&w photographs on monochrome papers, mounted on wood

The installation created a link between the venue of museum-like mediation in the city (the garden is accessible only from the Museum for Nature and Ethnology) and the so-called Barbara-Stollen outside the city where a backup of German cultural possessions is stored on a few million microfiches. The photographs which locked the doors to the courtyard show images of antilopes which were taken at the Museum of Natural History in New York. Those ontop of the fountain show text excerpts from the Hague Convention for the conservation of cultural goods in the case of military conflicts.